Zantac Lawsuit- What You Need to Know

By hummingbirdsouth on Apr 17 in Lewis & Feldman Blog. 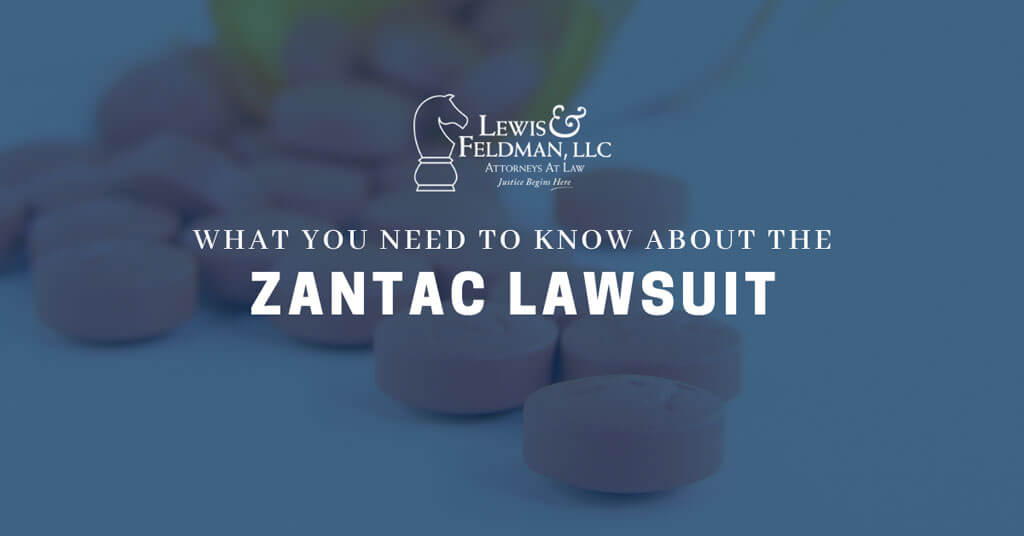 Zantac Lawsuit- What You Need to Know

The United States Food and Drug Administration announced on April 1st, 2020 that it is requesting manufacturers withdraw all prescription and over-the-counter ranitidine drugs from the market effective immediately. This is one of the latest steps in an ongoing investigation of a contaminant known as N-Nitrosodimethylamine (NDMA) in ranitidine medications — more commonly known by the name Zantac.

It was determined that the impurity in some ranitidine products increases over time when stored at higher room temperatures and could result in consumer exposure to unacceptable levels of impurities. This has resulted in the immediate market withdrawal request, meaning that ranitidine products will no longer be available for new or existing prescriptions or over-the-counter use in the United States.

NDMA is a type of nitrosamine compound classified as a probable carcinogen in humans by the International Agency for Research on Cancer. It can be found in smoked and cured meat products, toiletries, cigarette smoke and cosmetics. The consumption of NDMA is positively correlated with gastric and colorectal cancer.

During the summer of 2019, the FDA became aware of independent lab testing which found NDMA in ranitidine. While low levels of NDMA are commonly ingested in foods and water, this wouldn’t be expected to increase risk of cancer. However, higher levels of exposure may increase the risk of cancer in humans. New FDA testing and evaluations found that NDMA levels increase in ranitidine even under normal storage conditions. It also discovered that NDMA increases significantly when stored at higher temperature levels. In addition, testing found that the older a ranitidine product is or the longer length of time since its manufacturing, the higher the level of NDMA.

Quote from the USDA

The United States Food and Drug Administration stated the following: “The FDA is committed to ensuring that the medicines Americans take are safe and effective. We make every effort to investigate potential health risks and provide our recommendations to the public based on the best available science. We didn’t observe unacceptable levels of NDMA in many of the samples that we tested. However, since we don’t know how or for how long the product might have been stored, we decided that it should not be available to consumers and patients unless its quality can be assured,” said Janet Woodcock, M.D., director of the FDA’s Center for Drug Evaluation and Research. “The FDA will continue our efforts to ensure impurities in other drugs do not exceed acceptable limits so that patients can continue taking medicines without concern.”

Why Should You File a Zantac Lawsuit?

Zantac is commonly used to treat heartburn and acid-reflux like symptoms. It can often be purchased over-the-counter without a prescription. Research shows that NDMA present after consumption is the result of the “inherent instability” of the ranitidine molecule. Lawsuits allege that the manufacturer, Sanofi, did not warn users of the instability of the main ingredient or that it creates a carcinogen once ingested.

NDMA exposure from Zantac may be linked to:

If you or a loved one has been recently diagnosed with one of the above forms of cancer and have used Zantac regularly then you may be able to file a lawsuit against Sanofi. You could be entitled to financial compensation in your settlement to help pay for treatments, lost wages, pain and suffering. Contact Lewis & Feldman to schedule a consultation for your case and get the compensation you deserve.

Schedule a free initial consultation and case evaluation by calling the law office of Lewis & Feldman, LLC locally at 205-896-6410, toll-free at 888-705-3997 or complete our contact form. You can also email us at jon@LewisAndFeldman.com and dfeldman@LewisAndFeldman.com. We’re your personal injury lawyers serving Birmingham, Bessemer, Hoover and the state of Alabama who can help you receive the justice you deserve.