By hummingbirdsouth on Dec 13 in Lewis & Feldman Blog. 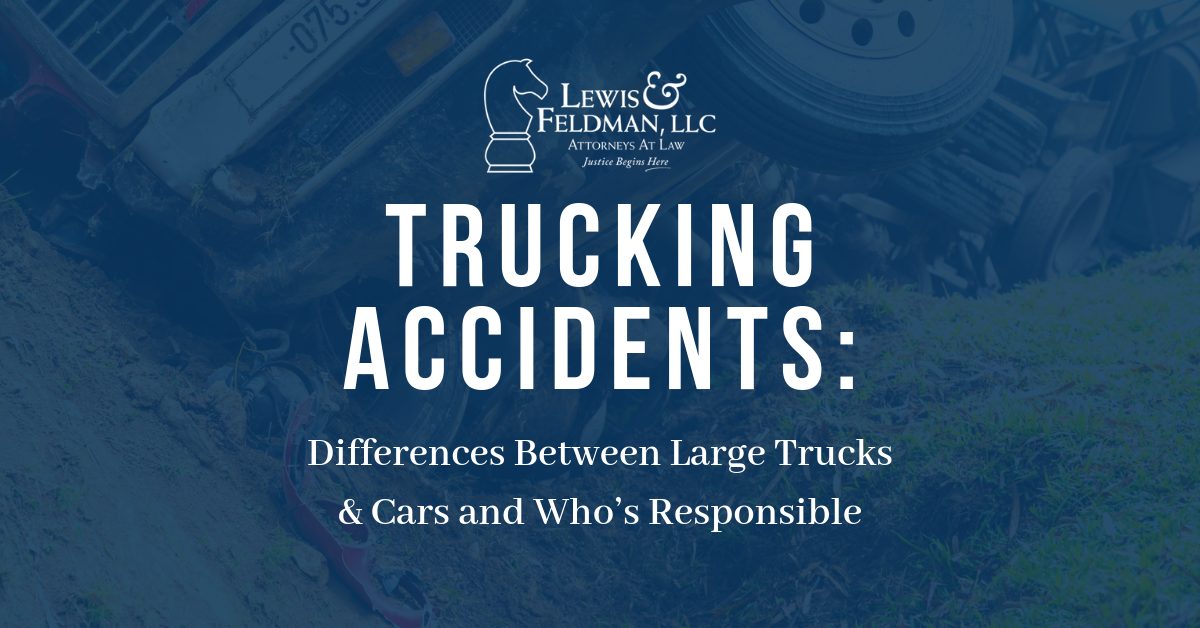 While the differences between large trucks and cars appears obvious to most, each year there are thousands of accidents that could have been avoided had traditional safe driving rules been followed.
The average car on the highway weighs roughly 4,000 pounds, or 1/20th of a fully loaded truck. This huge disparity in weight can have a massive effect on how large trucks and cars interact on the roads.

Mechanics
Semi-tractor trailers have specialized brakes in order to help them slow their cargo. Like other large vehicles, semi-tractor trailer trucks use compressed air brakes rather than hydraulic braking systems found on regular cars. Use of air brakes connects the systems for both the truck and the trailer, giving the driver control over all systems through the cab. While air braking is effective, it is not supernatural. Given the large loads trucks generally carry, they require significantly more room and time to stop.

Distribution of Weight
In addition to the effects weight can have on a large truck, how that weight is distributed is also important. Given the physics of how a trailer works, loads that are stacked high off the floor of the trailer and are not spread out across the entire trailer have a negative effect on handling ability. As a result, a large truck becomes even more difficult to maneuver at high speeds.

Visibility
Not only are trucks large and easy to spot on the roads, cars have windows on all four sides, giving the driver the ability to see what is in front of, next to, and behind at all times. Cars, on the other hand, are relatively small and hard to spot. Furthermore, trucks have massive blind spots on their sides just in front of the cab, just behind their side mirrors, and directly behind their trailers.
Large trucks not only have the added burdens of weight, inability to stop as quickly, and lack of agility, but the operators also have a harder time seeing the other vehicles on the road.

Driver Liability
Drivers of both cars and large trucks can be liable for accidents under several legal theories, the most common of which are negligence and wantonness.
Under a theory of negligence, a plaintiff must show that the driver did not act reasonably under the circumstances and this led to the damages suffered by the plaintiff.
If the driver of a regular car is being sued, the court determines what an ordinary driver would reasonably do in those circumstances. However, if a truck driver is being sued, the court determines what another truck driver would reasonably do in those circumstances. This distinction is important, as truck drivers are professional drivers with more training and experience than ordinary drivers and held to higher standards.
If the conduct exhibited by the person being sued is bad enough, the plaintiff may also bring a wantonness claim. Wantonness is effectively negligence to the point of recklessness, the disregard of the health and safety of others, with several key differences.
While a claim of wantonness is harder to prove, it is also far more serious, often bringing with it larger damages awards, the potential for punitive damages and possibly criminal proceedings as well.

Employer Liability
If the defendant of a large truck accident is the truck driver, then the driver’s employer may be liable for the actions of their employee and liable for their own negligence as well.
The employer can also be liable for damage arising from a large truck accident if they knew or had reason to know that the employee was likely to cause damage at the time of hiring, and the driver was hired anyway. Similarly, an employer can be held liable if they retain a driver despite acts of negligence or recklessness and this employee later negligently causes damage.

Contributory Negligence
Alabama law has a unique set of circumstances where a negligent defendant can still avoid paying any damages to a plaintiff. Under the theory of contributory negligence, if a defendant and a plaintiff both commit negligence then recovery is completely barred no matter how extensive the damage. Even if the defendant is 99% responsible for the damages, if the jury finds the plaintiff just 1% at fault then there is no damages recovery. The burden of proof on contributory negligence is on defendant.

This legal theory applies particularly well in many large truck accidents, as ordinary drivers often exhibit unsafe driving behaviors around large trucks, such as tailgating, cutting off after passing, and driving in the truck’s blind spots.

Our Birmingham, AL personal injury firm can analyze your case.
If you believe you have suffered as a result of someone else’s actions, contact us, Lewis and Feldman, at 205-896-6410 or toll free at 888-705-3997 for a free, no-risk consultation about your injuries.